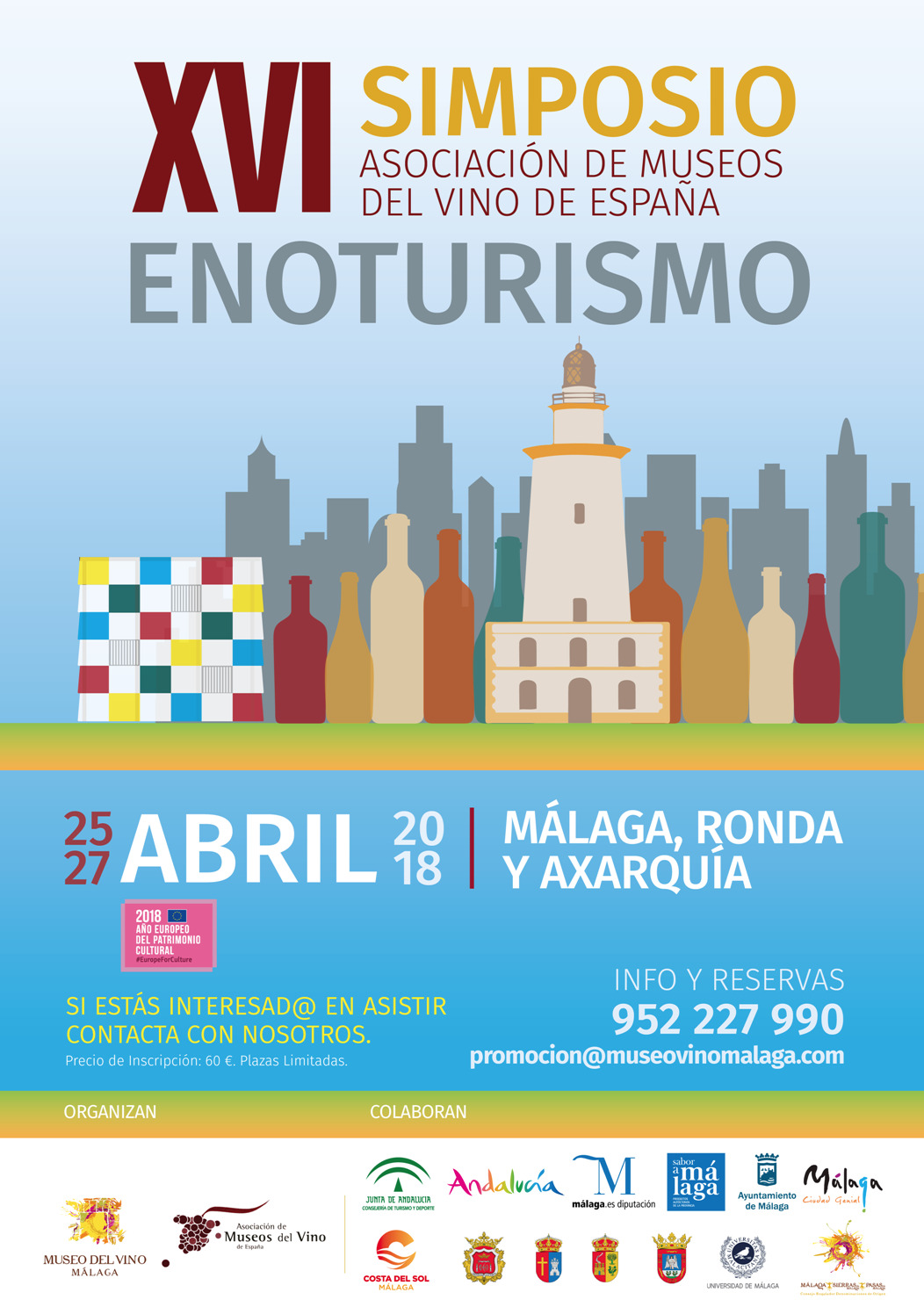 Of the 25 al 27 April Málaga will host the Symposium of the Association of Wine Museums of Spain, with the main theme of "Tourism", which it will be discussed from different perspectives thanks to the participation of prominent speakers who give their professional vision of a comprehensive and current topic that synthesizes Tourism, Culture, Food and wine.

Each day will take place in different municipalities: Malaga, Ronda and Axarquía, it also aims to raise awareness of the wine and territorial diversity of Appellations of Origin "Malaga", "Sierras de Málaga" and "Pasas de Málaga", production areas, types of wine and the wine tourism of the province with a wine certified by ACEVIN, The Ruta del Vino de Ronda and Malaga.

During the opening day of 25 of April, the current situation and the potential of wine tourism in Spain will be known with the presentation of Rafael del Rey, Director General of the Spanish Observatory Wine Market Foundation; Wine Museums and heritage sites in Portugal, thanks to the participation of Alberto Guerreiro, Director of the Portuguese Red Wine Museums; the role of the Guidelines in the phenomenon of tourism, hand sociologist and writer Lluis Tolosa; structure and training levels in tourism, with the presentation of Antonio Guevara, Dean of the Faculty of Tourism at the University of Málaga; and to close the day we will know of its creator, Enrique Lopez the success story of "The Cavino".

The second session will take place in Ronda, analyzing the role of museums of wine in the wine routes of Spain, with the presentation of Fernando Redondo, auditor Wine Routes of Spain, and reeled off some of the success stories from neighboring routes Andalusian Sherry and Montilla Moriles thanks to the participation of Cesar Saldaña, Enrique Garrido, Alvaro Alés and Pilar Bujalance.

the Symposium, which it has been awarded by the Ministry of Culture and Sports Seal Aval the European Year of Cultural Heritage, It will be held with the support of the Ministry of Tourism and Sport of the Junta de Andalucía, The Provincial Council of Malaga, The City of Malaga, and Costa del Sol Malaga, and with the collaboration of the municipalities of Ronda, Moclinejo and El Borge, the University of Málaga, and the Regulatory Council of Appellations of Origin Málaga, Sierras de Malaga and Malaga Raisins.

Malaga Wine Museum, owned by the Regulatory Board, It was inaugurated in July 2008, so celebrated in 2018 its tenth anniversary. Museums Association of Spain Wine, founded in 2005, brings together the bulk of the Museums Wine Spain, more than 30 partner museums, and objectives of the Museums Association of Spain Wine, as set out in its statutes and endorses the European Wine Tourism Charter signed in Paris in 2.006, have in principle contribute to safeguarding, conservation, and dissemination of wine culture in all its manifestations.